“We’re going to have a party for father’s birthday tonight,” a little friend announced to me the other day. Her mother laughed. “The party consists chiefly of a birthday cake,” she explained deprecatingly. “But it’s a party just the same,” insisted the youngster anxiously, ‘‘isn’t it, Aunt Ruth?”

“I’m sure it is if you feel that way,” I assented. And later, when I passed the house and saw the light shining out of the living room windows and the little youngster in her best gown with her nose pressed against the window, watching for her father, and two more youngsters dancing excitedly about, I felt quite sure there was going to be just the nicest, kind of a party, even if its only material manifestation was a birthday cake. 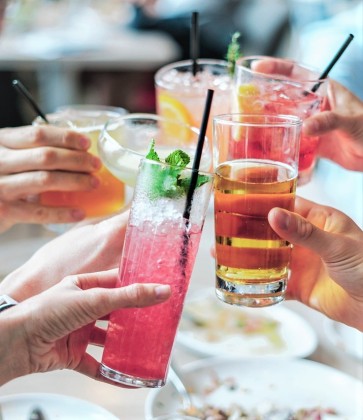 After all, what’s a party but a festive state of mind? You can’t have a really successful party without that. But you can have a happy party with that and little else.

Once upon a time there were two young people who were marooned on that most desolate of desert islands, a city where they knew absolutely no one. Now these young people were sociable folks; they came from a small town where they knew everyone and everyone knew them, and where jolly little neighborhood parties were the order of the week. At first they tried to forget their loneliness in work, but they soon found that you can’t work all the time and work well.

Finally they had a bright idea, and this is what they did. Since there was no one to invite them to a party they decided to give a party themselves every Saturday night. Whom did they invite? The only people they knew — themselves.

The wife put the house in company order, planned an especially nice dinner and dressed the table with her best linen and china. If they were flush, her husband brought her home two roses or pinks or daffodils for the one flower vase, and perhaps a box of candy.

They both dressed up in their very best, turned on all the lights in the house and dined in state. After dinner they danced with each other, played cards or perhaps made candy or had an open fire and just talked.

A pitiful party you say? Ah. my friend, there are many grand parties with thronging guests and costly banquets and lavish decorations which are far more pitiful in their lack of real good cheer. I think we’d all be happier if we had more of the former kind of parties and fewer of the latter. Of course. I don’t mean such a circumscribed one as this of necessity was, but just simple jolly little gatherings in which the festive spirit and not the costly food or the lavish entertainment is the backbone of the party.

— from Parties and Parties by Ruth Cameron, 1915